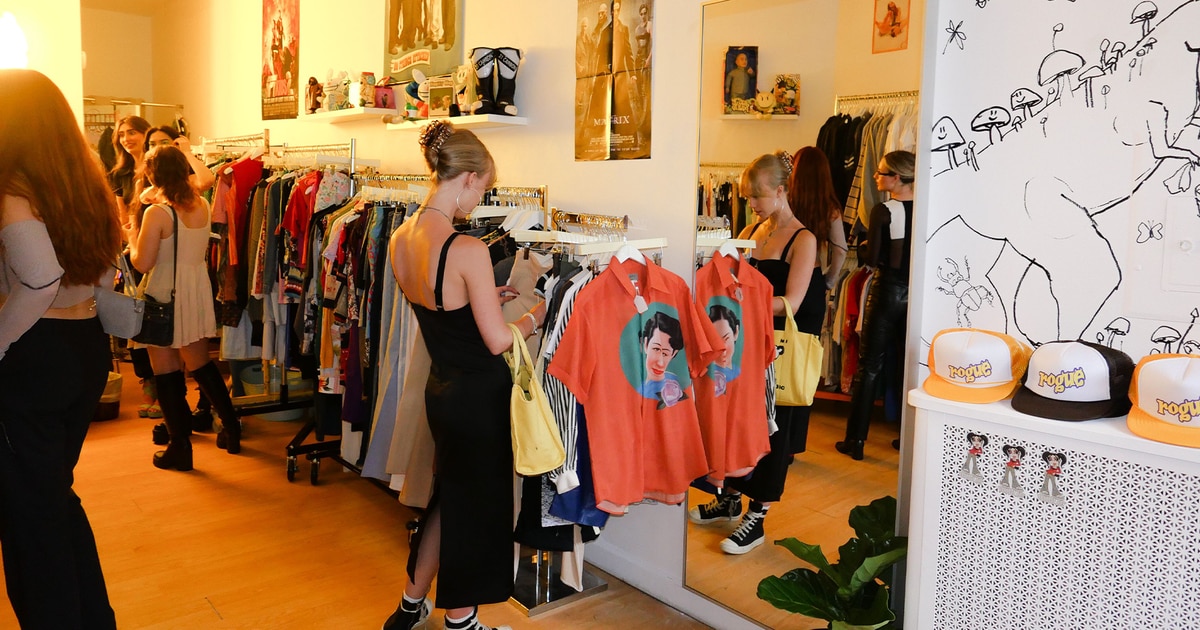 A generation that spent their teenage years flipping sneakers on eBay and creating thrift content for TikTok is making the leap into the real world.

Rogue, a vintage store on New York’s Lower East Side that opened this summer, is owned and operated by TikTok influencer Emma Rogue. The store is decorated like a ’90s teenage bedroom, with its walls covered in Spice Girls and Eminem posters and decorative shelves filled with old-school Furby and Tweety Bird toys. Shoppers dance to Britney Spears screaming over the speakers as they sift through racks of Tommy Hilfiger Y2K t-shirts and Prada nylon accessories.

Rogue started selling on Depop in 2018, flipping Skechers platform sneakers and vintage Guess t-shirts before building a sprawling presence on TikTok. Videos of her saving and recreating her parents’ 90s outfits have amassed millions of views and would direct shoppers to her Depop account. She decided to sign a lease in June 2021, taking advantage of a drop in rent prices earlier in the pandemic.

“We bring together young people from New York who want to explore their style and want to shop where it’s cool and pop,” Rogue said one recent afternoon wearing an oversized gray tracksuit, her eyelids covered in blush. neon green eyeshadow.

Next door to Rogue is Bowery Showroom, owned and operated by 25-year-old Matt Choon, who started flipping sneakers on eBay when he was 13 and later built a following on TikTok with thrift videos. From a couch in the back of her store, wearing Gallery Dept. Lanvin and big silver jewelry, Choon explained how he opened Bowery Showroom in April 2021 as a retail space for his CBD and vintage business. There’s Japanese denim, 1980s band t-shirts and 90s Chrome Hearts pieces.

And a 10-minute walk down East Houston Street is Funny Pretty Nice, a vintage boutique by 25-year-old Natalia Spotts, who has also made a name for herself selling ’90s fashion online. a rainbow assortment of Bebe, Baby Phat and Diesel, plus hard-to-find 1990s labels Hysteric Glamor and Custo Barcelona. She is opening a second store next month.

“There’s a joke that when you walk into a thrift store and see another girl who’s dressed cute, the timer goes off because they only release a certain amount of good clothes a day. and here we go,” Spotts said.

These sellers are also capitalizing on the vintage boom of the 90s and early 2000s, which was fueled by Gen Z consumers who want to create unique looks, as well as those who see occasion as a more sustainable to make their purchases. While these customers grew up shopping online, stores like Funny Pretty Nice and Rogue reflect how much they still love brick-and-mortar retail, even as they rely on TikTok to determine trends.

These new stores compete with dozens of existing vintage destinations in New York. But their retention of the 90s vintage gives them a distinct feel.

“Emma is really creative, so this doesn’t look like your average vintage store,” said Ashley Yun, a 21-year-old fashion influencer and FIT student who recently picked up a pair of Vivienne Westwood gloves for $85 at Rogue. “It’s more personalized.”

Store owners also see their stores as a more tangible way to connect with customers.

All this has a price. Rent alone can cost more than $5,000 a month, Spotts said. But vintage can be quite lucrative; Old tees from the 90s can be had for as little as $4 and can sell for $65.

Spotts maintains a steady stream of traffic at Funny Pretty Nice by inviting influencers to sell from their closets, while Choon frequently hosts parties in her space. Choon and Spotts’ businesses are on track to hit $1 million in sales by their first anniversary, they said.

“You can really only list 10 items a day. [online], but in the store, people are buying 10 items at a time,” Spotts said. “It’s about the volume at which you can sell.”

Blurring the lines of “Vintage”

Vintage rock t-shirts and Juicy tracksuits are definitely not for everyone. But Spotts and Rogue see their 90s and 2000s assortment as a way to differentiate themselves from vintage competitors, not to mention high-end destinations like The RealReal.

“Having good taste and a distinct perspective is what separates vintage sellers,” said Liana Satenstein, senior fashion editor at Vogue. “You want to buy from someone who knows the backstory…and is happy to talk about it.”

Rogue, which sources its vintage from mass wholesale events and estate sales, said it’s increasingly noticing pickers, who seek out vintage clothes for celebrities and designers, are buying up more contemporary labels.

“It’s funny to see the guys who were strictly looking for [the ’60s] in the trash are now picking up year 2000 stuff,” Rogue said. “I’m like, ‘You have no idea what you’re holding!’ But they see what we buy.

Not for all markets

These sellers are not only betting on nostalgic fashion. Both Spotts and Rogue have launched their own private labels which they sell in their stores, while Choon sells a handful of independent designers and takes a 30% commission on sales.

And while virtually every city has vintage stores, TikTokers’ particular strain of ’90s nostalgia may have limited appeal outside of New York, Los Angeles and a handful of other major cities.

“I love Houston, but it’s never been profitable,” said Olivia Haroutounian, 23, who has hosted vintage pop-ups in the Texas city as well as in Austin. “It’s a lot of work to have a store and you have to worry about theft, paying employees and all the liabilities that come with it.”

Haroutounian is looking for new pop-up locations in New York or California for this spring, and will also be partnering with other vintage digital sellers so they can share the costs.

“Something that looks alive on Instagram and Depop might not look so magical when you see it in person,” he said.