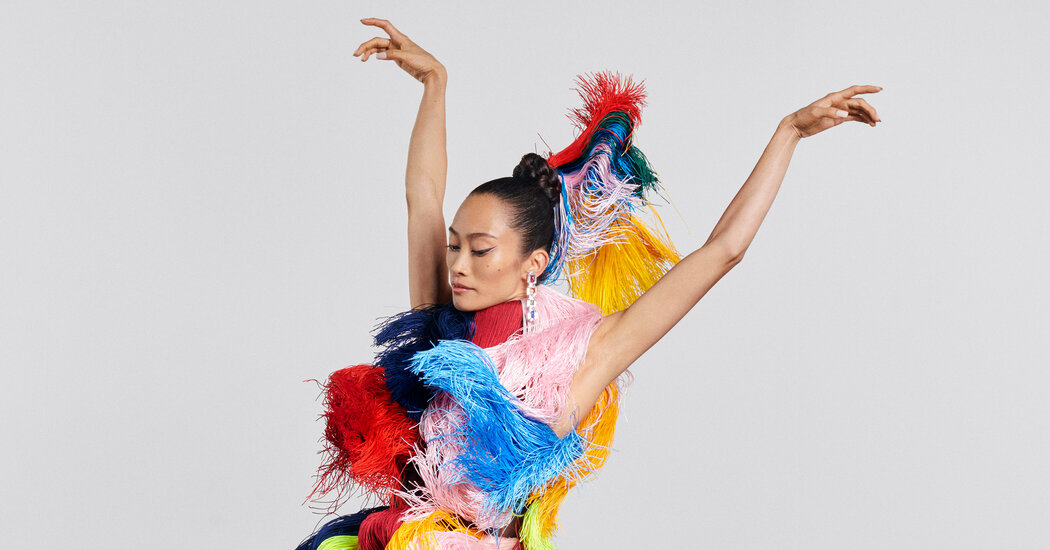 London, fashion and the importance of being … Something

LONDON – At first glance it looked like it was back to business at London Fashion Week. On Friday, a sprawling industrial show space was filled with PR types and security guards in helmets, lighted floor-to-ceiling screens showing social content (the venue was sponsored by TikTok), and tight rows of fashion sequins.

Many were celebrating Nensi Dojaka, the barely there, Albanian-born London designer of little black dresses, who became the latest LVMH award winner earlier this month.

It was her first solo show and the buzz was palpable, with a sense of cautious optimism emanating from the local crowd and largely unmasked after 18 long and difficult months. After all, everyone loves the rise of bright new talent. Especially when the fashion industry still feels muted and unmoored.

As with the New York collections, there was no real international audience. The result of travel restrictions, sure, but probably also the absence of big brands like Burberry, Christopher Kane and JW Anderson. That’s not to say that those who stayed weren’t determined to put on a show, even if it’s on their own terms.

At the Serpentine Gallery in Hyde Park, Roksanda Ilincic presented a â€œWomen in Motionâ€ dance recital with performers in swollen and decidedly feminine volumes in coral, chrysanthemum, peridot and merlot plunging and rotating to capture â€œthe kinetic dynamism of change. According to the show notes. Osman Yousefzada, known for his statuesque height and recent social activism, showcased looks in a alternative silk fabric made from wood pulp from sustainable sources. And Rejina Pyo opened her show on Sunday with the athletes of the British Olympic team diving from the diving board at the London Aquatics Center.

“I have the impression that the mood around us right now is linked to a desire for freedom, and the place where I feel freest is in the water,” said Ms. Pyo, pregnant with eight months of her second child. The models took turns around the pool in her see-through shirts, swimwear and sheer mesh dresses with photographic prints and a dazzling color palette of greens, ochres and pinks.

Motherhood, new life and beginnings emerged as a theme. Molly Goddard, on maternity leave following the birth of her son, presented a more accessible take on her vision for the oversized brand. She stepped up wardrobe basics like wide-leg denim and neon-hued Aran-style knits, offered more men’s looks as well as shrunken versions of some of her giant smocked dresses, inspired by the smaller proportions of children’s clothing.

Next, Simone Rocha, who had a daughter in May, offered meditations on mother-daughter relationships amid the dark cloisters of St. Bartholomew the Great, a medieval church in the alleys of one of the oldest neighborhoods. from London. She revisited design signatures like her layered white Holy Communion dresses, pearly embellishments and vinyl biker jackets and platform boots. From rhinestone encrusted nods to nursing bras, ribbon christening shawls, coats and button-down nightgowns in prints inspired by vintage pastel sheets were also woven.

“I couldn’t help but put myself to work and be influenced by the experience,” Ms Rocha said after her show (notably the only one of the London season where mask-wearing was encouraged at the gates. ), which moved some in the audience to tears. â€œThere have been a lot of sleepless nights. It was exhausting. But ultimately I felt so privileged to be back and to show in person and share my latest ideas. “

How, then, to nurture and encourage the next generation of designers? Names like Ms. Dojaka, whose confident and sexy designs perfectly sum up the desire many young women have to show off their bodies after months at home. Or Supriya Lele, finalist for the LVMH prize, who plays with the concepts of disclosure and concealment through asymmetrical shapes and bare skin.

British accessories house Mulberry decided to celebrate its 50th anniversary by asking members of the New Guard to reinvent some basic handbag styles while giving them the freedom to develop new ideas. After working with Priya Ahluwalia and Nicholas Daley, the brand’s current collaboration was with Richard Malone, who draped a jewel-toned exploration of Irish artisan heritage over models that roamed Renaissance treasure galleries at Victoria and Albert. Museum.

But perhaps another broader attitude change in the industry is also needed: a genuine acceptance of digital storefronts alongside physical catwalks as a way to view new fashion. It can be a complicated transition for those used to absorbing the theater and spectacle of the runway, or taking a close look at the cut and fabric. But live performances are a great financial and emotional strain on designers, a fact widely recognized even before the pandemic. If the survival of brands is a priority for the sector, habits will have to change.

Namely: Emilia Wickstead and Victoria beckham, who have both taken a digital first approach. Ms Wickstead created a video ode to French New Wave cinema, reworking versions of her bespoke dresses and partings in fruity tones and floral prints, while Ms Beckham’s professional lookbook featured trench coats and coats. with crisp cuts, matching tunics and pants that reflected her. leaning for a menswear silhouette alongside silky dresses with austere peekaboo backs.

Indeed, digital creativity was in the spotlight. The multicolored and maximalist crochet ponchos, knit knee high socks and recycled fabric ball gowns of Woolmark Award winner Matty Bovan took on (more) a psychedelic touch than usual thanks to a short retro video of the 1970s and the accompanying GIF look. delivered. And Michael Halpern produced a video featuring Royal Ballet School principal dancers in formal wear designed to come to life in motion.

“I wanted to support the London performing arts scene, the dancers who have endured so much with incredible discipline and determination,” he said backstage on set earlier this month, standing next to Colourblock column dresses with box-shaped fringe, orb -shaped balls finished with Swarovski crystals and flowing silky evening gowns. â€œAfter such uncertainty, I wanted to capture their joy that they could come back, stand and watch the wheels keep turning.â€

A similar feeling makes for one of the most emotional moments of the week. As guests gathered on Sunday evening under the colonnades of the British Museum to celebrate 15 years since Erdem Moralioglu’s first fashion show, a storm rumbled above. The designer likes to take inspiration from nonconformist characters from British history; this season was the turn of poet Edith Sitwell and Ottoline Morrell, an aristocratic philanthropist. Their influence sparked embroidered florals and bold floral prints, waisted-waisted Edwardian silhouettes and hats, romantic white lace dresses and shiny men’s tuxedo suits; an ode to survival and a love letter to the idiosyncratic soul of the British capital.

â€œI feel so lucky to be an independent fashion brand in London and I am fully indebted to everyone who makes this possible,â€ Mr Moralioglu wrote in his show notes.

During the finale, a rare double rainbow broke through the clouds to cling triumphantly against the gloomy sky.