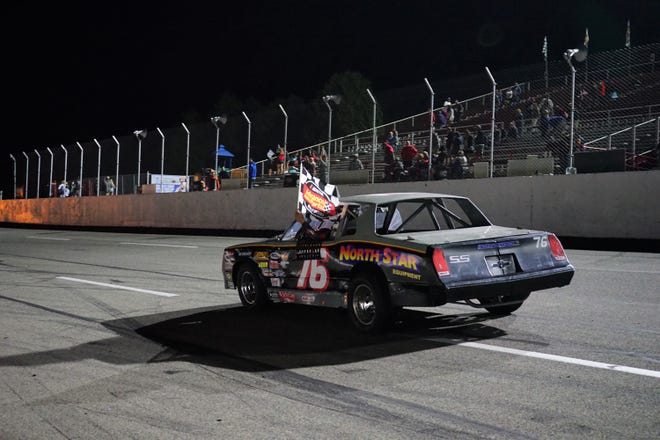 JENNERSTOWN — It was business as usual for many drivers at Jennerstown Speedway on Saturday night, as many of this season’s previous winners took another trip to victory lane. The only exception being Darin Mauzy.

Mauzy, in his rookie season in the Farmers Union Co-Op Chargers division, won his first-ever career race at Jennerstown on Saturday. The Davidsville driver had to battle for the lead but made the mid-race pass around Ken Burkholder for his first win.

A few “future” Hall of Famers also picked up victories on Saturday.

Barry Awtey continued his dominant season in late model Martella drugstores. Already the winningest rider on the track, Awtey took his seventh win of the season, but it didn’t come easy.

Just three laps into the race, Awtey was racing three with Teddy Gibala and Owen Houpt for fifth place. Gibala and Houpt got together and Awtey became collateral damage. He would take even more damage later when the cars piled up in front of him after the restart as he rolled into the back of Jeremy Shaffer and rammed into the wall. Despite the setbacks, he still couldn’t be beaten.

Ethan Myers led the first 23 laps of the race in a new car that Awtey is helping to work on, but after suffering brake issues Myers began to lose pace, allowing Awtey to pass him with just seven laps to go. TO DO. Jarred Barclay was second and Brian Shipp third.

In the One Stop Auto Sales Pro Stocks, Adam Kostelnik took his fifth win of the season. Kostelnik started on pole and led the 20 laps of the event. He’s second in the points standings behind Jeff Giles with just six weeks left in the season. Kyle Burkolder came in second while Giles took third.

It was a good night for the Kimberly Racing Team. To go along with Kostelnik’s victory, the team also saw Angie Kimberly pick up her third victory of the season in the Ron’s Collision Center Street Stocks.

Former track champion Steve Long was in the lead for most of the race. Third-placed Kimberly struggled to get around Brent Bickerstaff for second. They both grabbed Long and made it a three way battle for first. Kimberly eventually rounded Bickerstaff and used her momentum to propel herself into the lead, bringing her father, Dale Kimberly, with her. The father-daughter duo finished first and second. Points leader Greg Burbidge was third. Long and Bickerstaff finished fourth and fifth respectively.

In the Somerset Trust Fast N’ Furious 4’s, points leader Johnathan Haburcsak had to survive multiple restarts to earn his fourth win of the season. Haburcsak started on pole and took a big lead. Eight laps from the finish, Caleb Vasos’ car had a problem and came to a stop on the track, prompting the warning. Vasos, who is second in points behind Haburcsak, had to be pushed into his pit and did not finish the race.

On the restart, Haburcsak was lined up next to Lance Shawley on the outside. Shawley has shown speed at times this season with two race wins. Haburscak got the jump, but after completing just one lap the caution ran out for Allen Ohler who spun into Turn 2.

Haburscak again jumped on the restart, but Michael Strouse and Donald Hillegass reunited before the cars could even complete another lap, setting up another restart. Again Haburcsak was quick to accelerate and clear Shawley into the first corner and go for the win. Shawley was second and Skylar Berkey third.

It looked like an easy win for Doug Glessner in the Stoystown Auto Wreckers Modifieds. The Boswell rider led the division last year in wins, and now has more than anyone this season with four. On Saturday, he started on the front row and led every lap of the 20-lap final. Despite missing two races this year, Glessner is still fourth in the points standings.

Jennerstown Speedway will host an autograph night on August 20. Fans will have the chance to be on the track and meet the drivers before the races. The autograph session will begin at 5:15 p.m. and the races will begin at 6:30 p.m.

‘We’re not here to make no more money’: Casper’s new CEO on the way forward