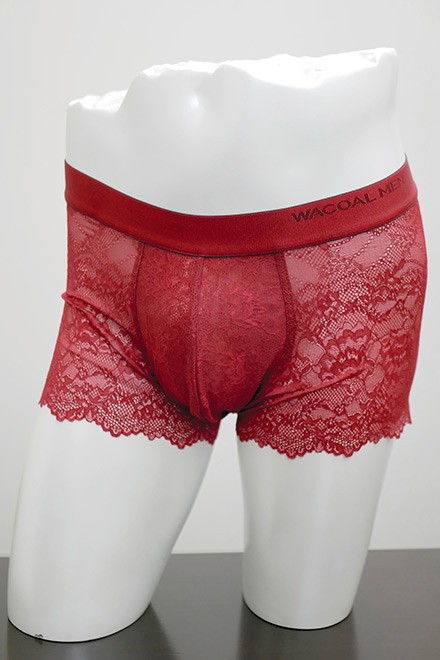 “Beautiful and airy”, the lace boxer for men is a surprise success

Testing the waters of the “genderless” movement in the fashion industry, Japanese clothing giant Wacoal Corp. added lace to a line of men’s underwear. Delicate items sold out quickly.

“I didn’t expect lace boxers to become such a hit,” said Akira Mizoguchi, who works in Wacoal’s sales and marketing section for men’s underwear. “Boundaries between men and women have disappeared around the world more than I thought.”

The company, headquartered in Kyoto, has produced countless lace underwear for women. But in December last year, it offered the range of lace boxers in seven colors, such as black, red and beige. Each is priced at 3,960 yen ($30).

“It’s obvious to everyone that lace is beautiful and lace underwear is breathable. So why not use lace for men’s boxers?” the company said in a statement about the collection.

In fall 2021, Wacoal accepted pre-orders of the lace boxers as part of a crowdfunding campaign. His goal was 300,000 yen.

The response exceeded the company’s expectations. About 700 people made pre-orders worth 3.2 million yen.

The boxers were all purchased shortly after Wacoal made the collection available online and in three stores, including Isetan Shinjuku Store Men’s Building in Tokyo’s Shinjuku district.

The company hit its three-month sales target in 10 days.

The company is expected to launch new lace boxer colors this summer and again ramp up production of the existing collection.

Many of the customers are men in their 30s and 40s, Wacoal said.

“It was love at first sight,” wrote one customer in the reviews section on Wacoal’s website. “Love the design and immediately bought it.”

“Wearing it lifts my spirits,” wrote another.

Over the past decade, fashion brands, especially those in clothing and jewelry, have led a movement to disrupt the traditional gender binarism.

They have, for example, offered pearl necklaces for men and used lace clothing and skirts in their men’s collections.

A Paris International representative said the company had received requests from retailers wanting to sell the briefs in their stores.

Hidetoshi Takeyasu, manager of the innerwear division of Gunze Ltd., an Osaka-based apparel company, said the trend of men’s underwear in Japan “has changed every 20 years or so under the influence of of Europe and the United States”.

Briefs took over in the 1950s and continued to be popular for about two decades. In the 1980s, men preferred to wear boxer shorts.

But boxer types became more readily available around 2000 and have remained popular to this day, Takeyasu said.

In the fashion industry, the business model of appealing to popular tastes and relying on bulk production has become obsolete and harder to sustain.

“Incorporating diversity and meeting segmented needs is more important these days,” he said.

E-commerce has allowed people to buy things without worrying about other shoppers’ prying eyes, Takeyasu said.

“It’s possible for an unconventional product to enjoy significant sales,” he said.

The best backpacks in India are durable and versatile