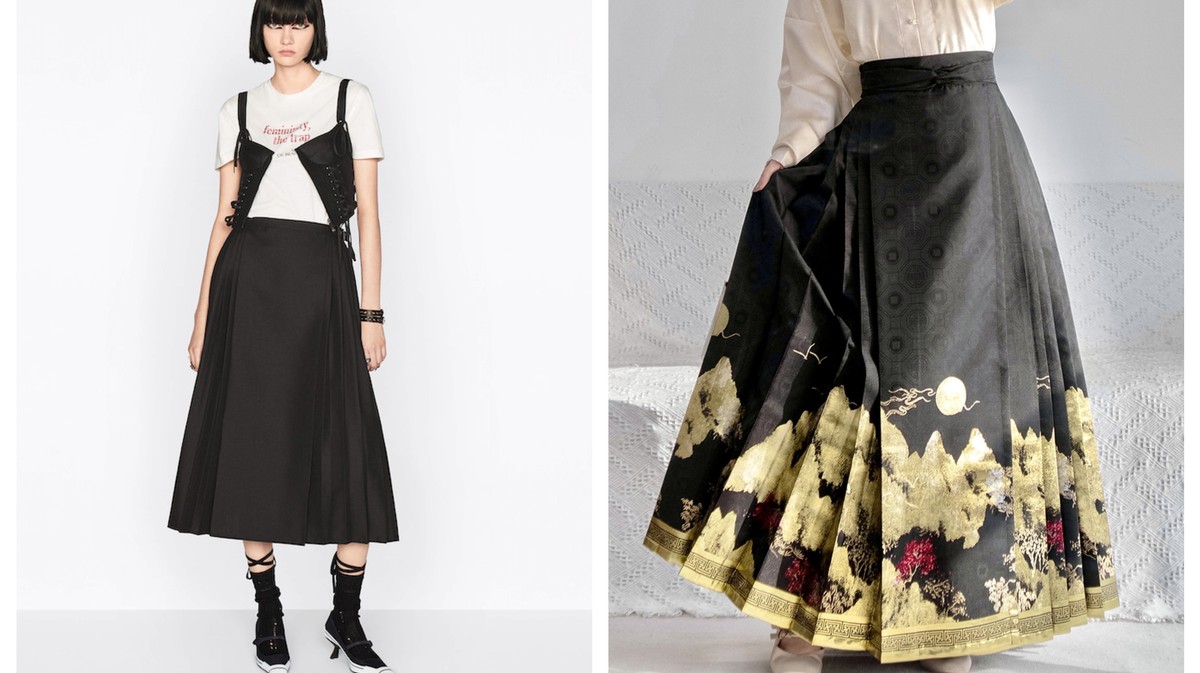 A mid-length pleated skirt by Dior (left) and a mamianqun, traditional Chinese clothing, sold on a Chinese e-commerce site.

Dior has been accused of appropriating Chinese culture for a pleated skirt that would resemble traditional Chinese clothing.

Priced at $3,800, the pleated midi skirt was launched in May as part of Dior’s Fall 2022 collection by creative director Maria Grazia Chiuri. But it was thrust into the public spotlight last weekend after Chinese social media users noticed the similarity in its pattern and pleats to the Chinese horse-head pleated skirt, or mamianqun, a type of Hanfu generally worn by women in the Ming Dynasty.

An editorial in the spokesperson of the Chinese Communist Party People’s Daily slammed the French luxury brand for describing its design as “a signature Dior silhouette.”

“The so-called Dior silhouette is very similar to the Chinese mamianqun and many details are the same. Why would they shamelessly call it a brand new design? The confusion and even anger of netizens is entirely reasonable,” he wrote.

The case highlighted the fine line foreign companies must walk when doing business in China, which is set to become the world’s largest luxury market by 2025, but whose 1.4 billion consumers are increasingly difficult to satisfy.

Not only are brands subject to scrutiny for any political messaging as well as cultural insensitivity, but they are also under increasing pressure to portray Chinese people and culture “positively.”

The People’s Daily The commentary acknowledged that the fashion industry often borrows from different elements. “This kind of Dior design doesn’t seem to pay homage,” he added, without explaining why.

Zhang Yan, a young Chinese fashion designer who debuted at New York Fashion Week in 2019, weighed in on Saturday, calling it a more serious offense than plagiarism. “By calling it their signature design, Dior is misleading their customers around the world,” Zhang said in a Weibo video, criticizing the luxury brand for not recognizing Chinese culture as the source of its inspiration.

However, a few users pointed out that in some previous scandals, where international brands offended Chinese consumers for perceived slights, the controversy had little effect on the companies’ long-term revenue and popularity. “This is going to explode in a few days,” wrote one user.

Dior did not immediately respond to a request for comment. The product has since been removed from Dior’s mainland China site, but is still stocked in physical stores in Hong Kong.

This isn’t the first time Dior has sparked controversy in China, where consumers are increasingly sensitive to foreign portrayals of Chinese culture. Featured in an exhibition organized by the brand last year, a photo by famous Chinese photographer Chen Man drew backlash for “defaming Asian women”.

The photo showed a heavily styled, freckled woman staring at the camera, while holding a Dior bag. State media accused the photo of making Chinese women ugly and distorting Chinese culture. Chen, the photographer, later apologized for her “inconsideration” and pledged to showcase Chinese beauty in her work.